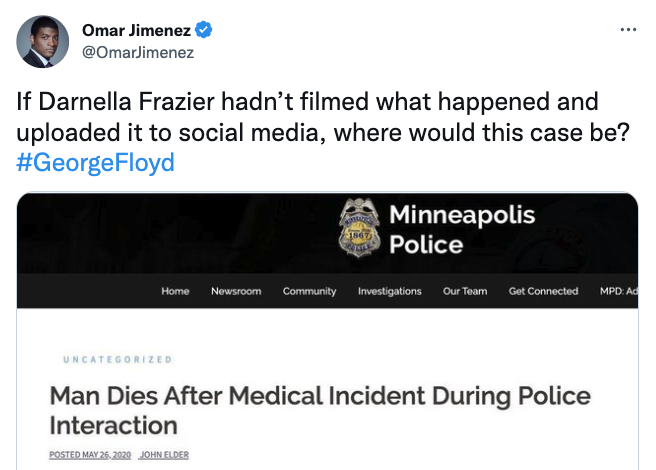 Trigger warning: In response to the news that John Elder has resigned from being the Minneapolis Police Department’s Public Information Officer, I am sharing this blog about the press release he published following the murder of George Floyd. I wish to acknowledge that, in using this release to make a larger point, I am treading closely to (or into) the pattern of white people using the death and pain of Black people for their benefit. George Floyd should be alive today, and the conviction of Derek Chauvin does not absolve white Minnesotans from needing to understand that “Minnesota Nice” is racism with a smile.

P.S. If you want to know more about this press release, you can review a case study I did for class.

Shortly after midnight on May 30, 2020, the Minneapolis Police Department (MPD) issued a press release stating a “suspect” had died after experiencing “medical distress” during a “police interaction.” Unbeknownst to John Elder, the Minneapolis Police Department’s (MPD) Public Information Officer (PIO) who sent the press release, Darnella Frazier had live-streamed the entire interaction, and that footage clearly showed that that the “medical distress” was caused by Derek Chauvin (at that time, a Minneapolis police officer) using his knee to pin “the suspect” (later identified as George Floyd) to the ground by his neck for almost nine and a half minutes.

While some activists question whether police PIOs purposely choose to lie in this and other cases of in-custody deaths and police shootings, Elder defended his actions by saying he was simply reporting the information that had been shared with him at that time.

As a strategic communication and public relations professional, I know it is tempting to minimize this press release as the actions of a single PIO who was too willing to do what he was told or moving too quickly. However, when I read the release with a critical eye, I was struck that it is possible to defend the text as true on the surface. In fact, as I read the words while thinking of my work, I began to remember times I’ve rejected criticism under the belief I knew best, and I heard my own voice saying things like “I was just sharing what, technically, happened” or “How was I supposed to know I was told something wrong?”

That is why all communications professionals need to reread the MPD’s press release and consider what it has to say about our profession. Too often, conversations about our ethical responsibilities end with the simple idea of “DO NOT LIE.” We are told that lying will be the fastest way to lose credibility, but the MPD’s press release shows that it is very possible to not lie—but also not tell the complete truth.

This press release shows why we must challenge ourselves to think more critically about the power and responsibilities we hold as gatekeepers of information and storytellers for our organizations. We must consider how our organization-first thinking makes it easier to justify only telling an organization’s preferred narrative. This decision is often not purposeful, so it highlights the importance of building pause points and feedback channels into your regular operations.

We also must question how we treat the people whose names, experiences, and photos we use in our materials. And, we must pause when feeling the urge to rush to be the first to put out a statement and, instead, ask if our organization’s actions fulfill the values we wish to claim. If that answer is no, we must be willing to say it would be better for our organizations to bring attention to other voices.

Rather than pushing off the MPD’s press release as an example of PR done wrong, if we wish to be truly responsible professionals, we must each be willing to understand that we are human beings born and raised in white supremacy culture. Furthermore, we must accept that we now work within organizations and institutions that continue to depend on and support that culture’s survival.

We must take time to find ways to identify when we are making decisions based on our positionality, power, and/or privilege (referred to as the 3Ps), and we must push ourselves harder in our understanding of what it means that (as stated in the PRSA Code of Ethics) “the level of public trust PRSA members seek, as we serve the public good, means we have taken on a special obligation to operate ethically” (emphasis added).

This site uses Akismet to reduce spam. Learn how your comment data is processed.